-- Qatar’s ambitious labour reforms a cause for optimism

In times of political crisis, it is common for states to restrict human rights. Qatar has gone in the opposite direction. Following the Saudi Arabia-led economic and political blockade of the Gulf Cooperation Council’s most independent state, last October Qatar reached an agreement with the International Labour Organisation (ILO) and the International Trade Union Confederation (ITUC) to usher in sweeping reforms to its migrant labour regime. If Qatar delivers on these promises it will represent one of the most radical shifts in public policy in the region.

Among other commitments, Qatar has pledged to eliminate forced labour and human trafficking, improve and expand coverage of the Wage Protection System, announced plans to introduce minimum wage rates for workers regardless of nationality, and tackle recruitment-related exploitation at the source by processing visas in workers’ home countries. A new law seeks to recognise some of the basic labour rights of Qatar’s mostly female domestic workers. Most significantly, Qatar has promised to end the kafala sponsorship system by removing restrictions on a worker’s ability to change employers and exit the country.

In layman terms, the pledges made by Qatar to the ILO hit most of the nails in the head. But there are significant challenges. The country has an estimated two million foreign nationals, the majority of whom are low wage migrant workers. Nepalese workers account for the second largest worker population, over 450,000 people. It will take time, and significant will and resources to ensure all these men and women are able to work with respect and in dignity.

The agreement reached with the ILO seeks to increase worker representation, but Qatar has yet to commit to ending the prohibition on independent trade unions. Workers can still be prosecuted for ‘absconding’ from their employer, a criminal penalty that traps many workers who have no choice but to escape exploitative employers. Abusive employers are known to cancel the visas of workers who seek to escape in the knowledge that they will be detained by the police as criminals and not given justice as victims. It remains illegal for men and women to have sexual relations outside marriage, a significant barrier for women migrant workers who have been subjected to sexual abuse and fear they will be prosecuted rather than helped. There is limited space for independent civil society and workers still face the grave fear of retaliation merely for reporting complaints about their treatment. The recent detention of Nepalese journalists by Qatar police during a public gathering of the Nepal Federation of Journalists in Doha has left independent observers and workers afraid of speaking out about legitimate concerns about labour conditions.

Sadly, these are challenges that Qatar shares with its GCC neighbours. Yet as other states continue to restrict civil liberties and offer only modest labour reforms, Qatar has displayed the courage and ambition to err on the better side and a willingness to engage with independent observers to begin the process of reform. A reflection of Qatar’s bona fides is its invitation of the Builders and Woodworkers International (BWI), along with the ITUC, one of the two major global trade union representative bodies, to openly carry out joint site inspections on 2022 FIFA World Cup sites. These are significant steps in a region where governments are known to actively target trade unionists.

Qatar’s open invitation to the ILO to establish a physical presence in the country, to work directly with government authorities to build their capacity to administer the reforms, and to even allow the organisation to accept complaints directly from workers is an unprecedented, and positive step. The message from Qatar is clear: we want genuine reform, and we must work together to make it happen.

Earlier this month I visited Qatar to observe the first steps of the proposed reforms. Along with speaking to ordinary workers, I met with the Labour Minister Dr. Eisa Saad A. Al-Naimi and other government officials. During our lengthy discussion, I was impressed by the breadth of Dr. Eisa’s knowledge of the issues, his clear passion for making the reforms work, and honesty about the challenges ahead. All the workers I spoke to, individuals I encountered independent of my government meetings, said they had come to Qatar in the hope of work and better prospects for their loved ones. They spoke in equal measure with cautious optimism and anxiety about the reforms. As one worker from Nepal, a hotel service desk assistant, told me, “I pray these reforms will make things better. All I want is to work with dignity, in safety. Thanks to my job in Qatar I can afford to put my kids in a good school back home,” she said.

Of course, these are early days and the road towards genuine improvement in labour standards will require sustained commitment until well after the world’s attention has dimmed. The reforms cannot succeed without the expertise and support of labour rights experts and civil society, including trade union activists and community organisers from Nepal. But Qatar deserves credit for showing the audacity to chart a path towards greater respect for the fundamental rights of the many thousands of men and women who build its impressive towers, service its infrastructure, and raise its children. Having thrown the gauntlet, there is no turning back.

Mustafa Qadri is the Executive Director of Equidem Research and Consulting, a specialist labour rights investigation organisation. More information on Equidem is available at: https://equidemresearch.org. 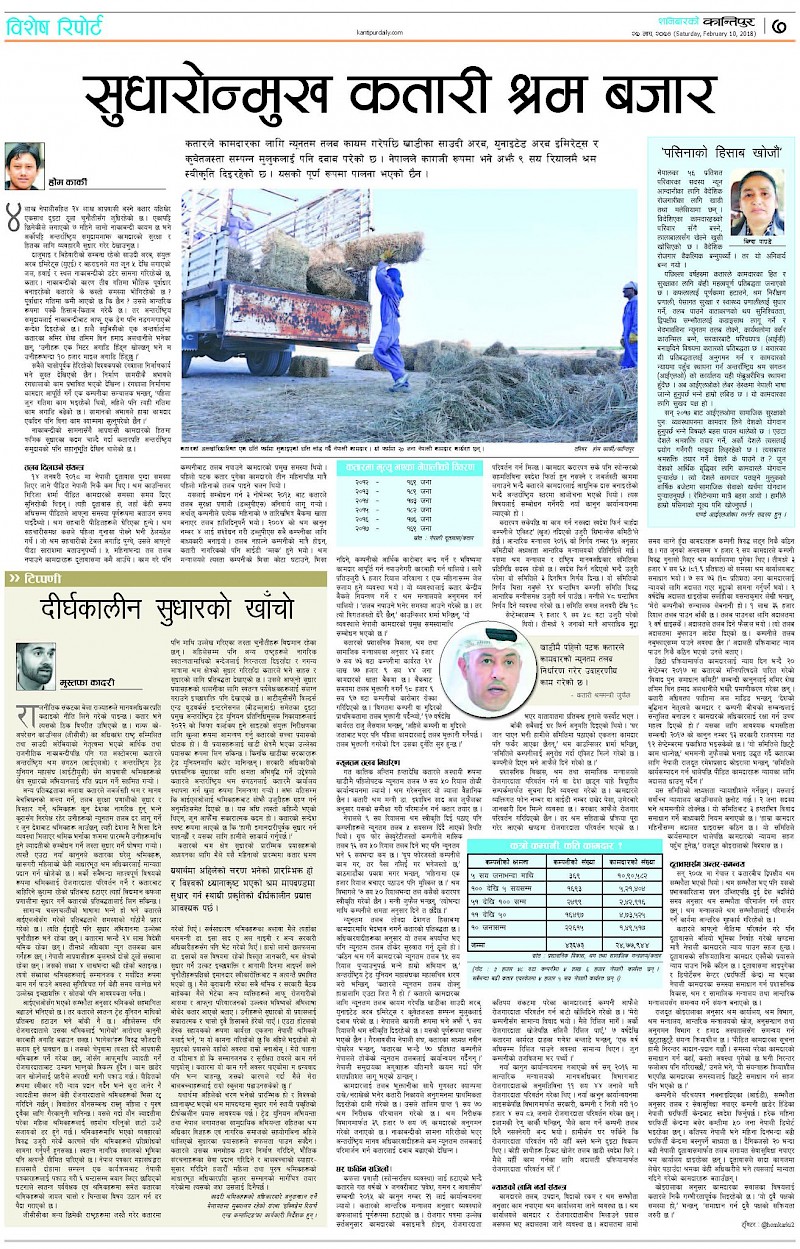