-- Keep pushing the boundaries: Reporting on modern slavery in the Gulf 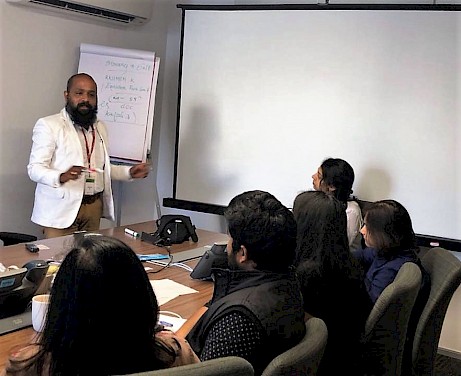 Rejimon’s hour-long session, attended by 10 mid-career journalists, focussed on the lives of an estimated 600,000 migrant workers trapped in conditions of forced labour and human trafficking in the Gulf. Reji described the stories of a number of men, women and children he had interviewed over twelve years as a journalist, and the systemic gaps in the countries of origin and destination that permit the exploitation and abuse of migrant workers.

Journalists attempting to investigate modern slavery and human trafficking in the region have faced a lack of information, restrictions on press freedom and security threats. Some have been detained and deported. With this in mind, the session also covered best practices, tools and steps in reporting on labour issues in the Gulf region.

“The Gulf story is not just a narrative of the millions of dollars in remittances that migrant workers send home annually but also a story of life, struggle and survival for thousands of individuals.” Rejimon said, “Journalists must continue to push the boundaries and provide rigorous and nuanced stories on migration that have migrant workers at their heart.”